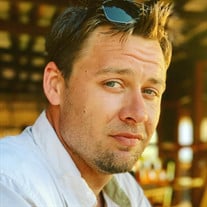 Willard Warren Smith, age 39, of Cove, Arkansas passed away Friday, February 5, 2021 in his home. He was born January 31, 1982 in Fort Smith, Arkansas to Boyd Stephen Smith Sr. and the late Bonnie Carol Jewell. He was married to his soulmate Ashley Ann Smith for 14 years. Warren was a loving husband and an adoring father. He took great pride in all three of his children, Eli, Cash, and Stella and loved them more than life. He was always the fun Dad and his constant schemes kept his family entertained. Warren was an artist, inventor, creator, sculptor, and freethinker. He dealt in spirituality. He ran Smith's Foods in Cove for many years and brightened the entire community with his amazing smile and quick wit. He was especially fond of his Granny and always made sure to keep her lawnmower running and fixed things for her all the time. Warren was always into something. Whether it was methodically working his way through a painting, tinkering with a contraption, or sketching a diagram to explain whatever concepts and theories currently occupied his mind. He was known for having at least two limes in his pocket and would randomly pull them out for a quick juggle. He was a jack of all trades and a master of more than a few. Warren was never at a loss for words. He had a solid grasp of the art of debate and was one of the most brilliant minds to ever grace our world. He had mastered the art of mixing the perfect white Russian and he could whip up a mouthwatering meal from the simplest ingredients. Warren could and would play any instrument that fell into his hands. And he could turn any moment into a song. He loved to travel, and he planned to live out his last years at the beach, side by side with his love. Warren made an impact on everyone who met him. His generous spirit was well known and his loss is felt very far and very wide. All along these hills, this valley, and the gorgeous and wild Cossatot he called home. He is and will continue to be deeply loved and missed. Warren is survived by his beloved wife, Ashley Ann Smith; three children, Elijah Matthew Henderson, Rhoderick Cash Smith, and Stella Ann Smith; father, Boyd Stephen Smith Sr.; grandmother, Ina Lou Smith; brothers, Boyd Stephen Smith, Jr., Michael Aaron Smith and wife Lela, and Nathan L. Wolfenbarger; sister, Adrian Diane King and husband Joe; niece, Mila Lou Smith; nephews, Joe Taylor King III and Julius Job King and numerous aunts, uncles, cousins and dang near all of Polk County. He is preceded in death by his mother, Bonnie Carol Jewell, paternal grandfather, Boyd Fay Smith and maternal grandparents, Willard and Ruby Jewell. Services for Willard Warren Smith will be Thursday, February 11th at 10 am at Cove First Baptist Church. Internment will follow at Witherspoon Cemetery in Vandervoort with Brother Donnie Jewell officiating. Services are under the direction of the Beasley-Wood Funeral Home. Pallbearers include Alan Adcock, Beau Winkley, Matt Davis, Michael A. Smith, Elijah M. Henderson, and Nathan Wolfenbarger. Honorary pallbearers include Chad Miller Smith (Mayor of Cove), Jason C. Seebach, and Corey Hudson. Flowers may be sent to Beasley-Wood Funeral Home.

Willard Warren Smith, age 39, of Cove, Arkansas passed away Friday, February 5, 2021 in his home. He was born January 31, 1982 in Fort Smith, Arkansas to Boyd Stephen Smith Sr. and the late Bonnie Carol Jewell. He was married to his soulmate... View Obituary & Service Information

The family of Mr. Willard Warren Smith created this Life Tributes page to make it easy to share your memories.

Send flowers to the Smith family.