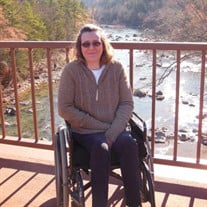 Mrs. Wendy Ellen Jones, age 54, passed away Sunday, December 5, 2021. She was born April 5, 1967, in Key west, Florida to Walter William Davidson and Barbara Leona (Utley) McGrath. Mrs. Jones was a homemaker by profession. She enjoyed crocheting and was known as a movie buff. Wendy never met a stranger and considered all to be her family. She constantly took in those who were in need. But above all else, she dearly loved her daughters and grandchildren. Mrs. Jones is preceded in death by her father-in-law, Doug Jones, maternal grandparents, and her paternal grandparents. She is survived by her loving husband, John Paul Jones; daughters, Amanda Lynne Chittenden and husband Sam, and Katherine Marilee Jones and fiancé, Jhonatan Teodoro Mendez; grandchildren, Aiden Chittenden, Kristopher Teodoro, and Jaylyn Teodoro; brothers, Keith Davidson, and Donald Davidson; stepfather, Dan McGrath; mother-in-law, Patricia Jones, and bonus mother-in-law, Dorothy Jones. Memorial services will be Friday, December 10, 2021, at 2:00 p.m. at Beasley-Wood Chapel. Cremation services have been entrusted to Beasley-Wood Funeral Home.

The family of Mrs. Wendy Ellen Jones created this Life Tributes page to make it easy to share your memories.

Send flowers to the Jones family.