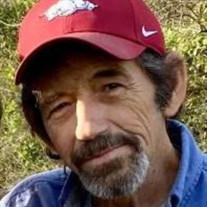 Thomas William “Tom” Priest, age 60 passed away April 1, 2021 at UAMS in Little Rock, Arkansas. He was born to the late Tommie Lee Priest on August 23, 1960 in Rockwood, Tennessee. Tom was a loving husband, father and grandpa. He provided for his family working as a Radiographer on the pipelines. A true “jack of all trades”, he could build or fix anything. Tom was known to rock the guitar and was a loyal Arkansas Razorback fan. He was fun and witty. Everything he did was for his family and he will be missed greatly. Tom was preceded in death by his mother, Tommie Lee Priest. He is survived by his wife, Tammy Priest of Pine Ridge, Arkansas; daughters, Michelle Miller and husband Jeremy of Mena, Arkansas, Melanie Libby and husband Johnathan of Pine Ridge, Arkansas; son, Jeremy Priest of Little Rock, Arkansas; grandchildren, Ty Davis, Mason Davis, Mackenzie Davis, Dominic Libby, Sebastian Libby, Tucker Miller, Araiyah Libby and Gatlin Miller; brother, Robert Priest of Forsythe, Missouri; brother-in-law, Tim Martin and wife Ananda of Mena, Arkansas; sister-in-law, Tina Higginbotham and husband Michael of Jena, Louisiana; mother-in-law, Sandra Martin of Pine Ridge, Arkansas; father-in-law, Jerry Martin and wife Marilyn of Waldron, Arkansas and a host of nieces and nephews. Cremation services are entrusted to the Beasley-Wood Funeral Home. A family memorial service will be held at a later date. Online obituary at www.beasleywoodfuneralhome.com

The family of Mr. Thomas William "Tom" Priest created this Life Tributes page to make it easy to share your memories.

Send flowers to the Priest family.