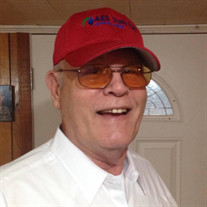 Sherman Lee Hanks, also known as Dad, Daddy, and PaPa, passed away peacefully with family by his side on Tuesday, March 10, 2020, at the age of 75. Sherman was born on June 28, 1944 in Coalgate, Oklahoma to the late Loyd Hanks and the late Gladys Coffee Hanks, both of whom preceded him in death. He proudly served his country in the United States Army as a Sergeant First Class E-7 and retired in 2004. Through his many years of service, he traveled the world, made great friends and gained many skills. Sherman started off as a young boy in the Boy Scouts and became a member of the Holiness Church. He finished school in 1962, and then worked in an automotive repair shop with his father. In February 1966 he was drafted into the Army. Many of his hometown friends were sent to Vietnam and didn’t make it home, but he lucked out and was sent to Mannhiem, Germany as a cook (94B). He was discharged from active duty in March 1968. After 15 years as a machinist foreman at US Motors he rejoined the Army National Guard as an Ammo Bearer then after two years he became a mess hall SGT and fulfilled his love for food service. He retired in 2004 from the Army National Guard. In his civilian life he was in the restaurant business as a profession. For 22 years he served up delicious food at Suree’s Restaurant. Some days, Sherman liked to experiment in the kitchen, which could either be a delightful surprise to the customers that day or a displeasure if it was to their favorite dish he had altered. He was loved by many people, as he was always cheerful and had a smile on his face while choosing to not take life to seriously. Sherman was survived by: Daughters: Samantha Hanks Kiger (Lundy) of Poteau, Oklahoma Martha Hanks Mattingly (Darrell) of Van Buren, Arkansas Sumitra Reid (Ryan) of Fayetteville, Arkansas Jonnie Honse Sutter (Ford) of New Orleans, Louisiana. Grandchildren: Jakob, Ethan, Andrew, Austin, Miranda, Hailey, and Mya Several great-grandchildren. Brother: Jerry Hanks Sisters: Patricia (Teresa) Hanks-Moore Linda Hanks-Hammerlein Sherman was a member of the American Legion post 18, VFW, Disabled Veteran’s Association, and the Elks Lodge #781. He was a perfectly imperfect person, a wonderful husband, father, grandfather, brother and friend. While we wish so badly that we could keep him here with us on Earth forever, we’re comforted to know he was reunited with numerous people he loved in Heaven. All who loved and knew him are invited to join us for a Celebration of Life with military honors at The Gospel Lighthouse Pentecostal Church in Coalgate, Oklahoma, Friday, March 20, 2020 at 1P.M. Inurnment in the Woodman Cemetery in Coalgate, Oklahoma.

Sherman Lee Hanks, also known as Dad, Daddy, and PaPa, passed away peacefully with family by his side on Tuesday, March 10, 2020, at the age of 75. Sherman was born on June 28, 1944 in Coalgate, Oklahoma to the late Loyd Hanks and the late Gladys... View Obituary & Service Information

The family of Mr. Sherman Lee Hanks created this Life Tributes page to make it easy to share your memories.

Send flowers to the Hanks family.