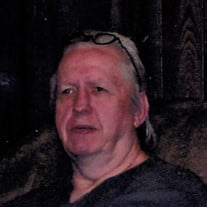 Russell Franklin Welch, age 72, passed away at his home October 31, 2020 surrounded by his wife and 2 sons. Russell was born November 21, 1947 in Sonora, California to the late Russell Earl and Alma Jewell. He graduated Highschool in Crescent City, CA in 1965, and joined the Army. Mr. Welch served his country from 1965 to 1968 as an Army Medic PVT E-1 and served 1 tour in Vietnam. In his civilian life, he went to college at Humboldt State and San Francisco State, California where he obtained his bachelor’s in science and his Masters in English. Russell then went on to teach at Santa Rosa College. Mr. Welch came to Mena in 1973 and was an EMT and a Paramedic for the Ambulance Service. From 1974 to 1976 he was a Polk County Deputy Sheriff under Corky Callahan and Al Hadaway. In 1976 he joined the Arkansas State Police where he worked for 20 years as a criminal investigator until he retired as a Corporal in 1996. Russell married the love of his life, Debbie Hicks, in 1979 and they were married for 41 years. She was always by his side through everything. Russell loved to read and listen to music. He really enjoyed playing guitar and taught both of his sons how to play. Russell loved his family dearly. He was a member of the Mena Masonic Lodge, 32 Scottish Rite Freemasonry of AR, VFW of Crescent City, CA, and the AR State Police Association. Russell Franklin Welch will be missed by all who knew him. He is survived by: Wife: Debbie Welch Sons: Frank Welch and wife Melissa Jimmy Welch and wife Amber Grandchildren: Marcus, Natalie, Bella, Aden, and Corbin Great Grandchild: Expected in January- Colt Daughters: Heather Welch Ariel and husband John Wilson Stepdaughter: Apryl Marshall Brother-in-law: Ed Oliver Sister-in-law: Donna Hicks 2 nieces and 3 nephews and one special nephew, Jerod Stinson, and a special cousin, Charlie Wolfenbarger. Memorial service will be Wednesday, November 4, 2020 at 1:00 p.m. at the Beasley Wood Chapel with Brother Donnie Jewell officiating. Visitation is Tuesday, November 3, 2020 from 6:00 to 8:00 p.m.

Russell Franklin Welch, age 72, passed away at his home October 31, 2020 surrounded by his wife and 2 sons. Russell was born November 21, 1947 in Sonora, California to the late Russell Earl and Alma Jewell. He graduated Highschool in Crescent... View Obituary & Service Information

The family of Mr. Russell Franklin Welch created this Life Tributes page to make it easy to share your memories.

Russell Franklin Welch, age 72, passed away at his home October...

Send flowers to the Welch family.