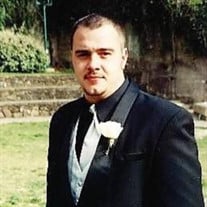 Ronnie Davis, age 41, of Hot Springs, Arkansas died January 24, 2021 in Hot Springs, Arkansas. He was born on December 17, 1979 to Deena Burgess and the late Roy Davis in Hot Springs, Arkansas. Ronnie was known for his love of music, spending time at the lake, football (especially his dear Razorbacks), and always being the life of the party. Anyone that knew Ronnie knew of his love for his children. They were his entire world. Ronnie is survived by his mother, Deena Burgess of Hot Springs, Arkansas; daughter, Lexi Davis of Mena, Arkansas; son, Colby Davis of Mena, Arkansas; brothers, William Burgess of Conway, Arkansas, and Roy Davis of Colorado; sisters, Ashlee Burgess of Conway, Arkansas, and Crystal Davis Button of Chicago, Illinois; the mother of his children and dear friend, Whitney Horne; and numerous aunts, uncles, nieces, and nephews. He was preceded in death by his father, Roy Davis; stepfather, Bill Burgess; grandparents, Delbert (his adoring Popo that passed away exactly 20 years ago to the day) and Loretta Goss; and aunt, Lisa Goss. Ronnie will be sent for cremation under the direction of the Beasley-Wood Funeral Home. A memorial service will be held at a later date.

The family of Mr. Ronnie Davis created this Life Tributes page to make it easy to share your memories.

Send flowers to the Davis family.