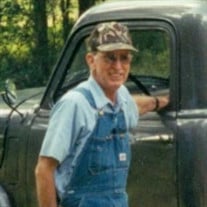 Mr. Ronald Dwain(Ron) Carrell, 88, of Mena, Arkansas passed away Friday, June 4, 2021 at his home. He was born June 15, 1932 in Ben Wheeler, Texas to the late Roy Carrell and the late Nannie Ellison Carrell. He was happily married to Sarah... View Obituary & Service Information

The family of Mr. Ronald Dwain Carrell created this Life Tributes page to make it easy to share your memories.

Send flowers to the Carrell family.