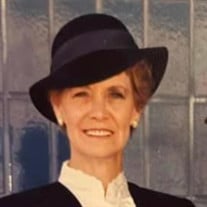 Roberta Marlene Ashman of Mena, AR passed away peacefully on March 1, 2021 surrounded by her children and grandchildren. She was surrounded by her loved ones when she passed into His arms from ours. Marlene was born on April 26, 1940 in Mobeetie, TX. She is preceded in death by her beloved husband John, parents Roy and Eunice (Robinson) Howard, and sisters Dorothy Gay Howard and Barbara Geraldine Howard Kishiyama. Marlene was a force of nature to all those who knew her. She was funny, kind, empathetic, charitable, and loyal. She placed her family above all else. Throughout her marriage to John, a sailor in the United States Navy, it fell to her to be both mother and father to her three children due to some of his long sea deployments. They would have been celebrating their sixtieth wedding anniversary on the 18th of this month. She was a strong and determined woman and her selflessness and love of family served as an example of how life should be lived. She was wife, mother, grandmother, and friend. Marlene lived a life of service. Throughout her life she volunteered as softball coach, Little League coach, PTA member, Girl Scout leader, Boy Scout Den Mother, Naval Ombudsman, and was a member of the James K. Polk chapter of the Daughters of the American Revolution. Marlene was diagnosed with lung cancer in June 2020. She was treated at Moffit Cancer Center in Tampa, FL from July to October 2020. She returned to Mena in October 2020. In late February the cancer began to spread aggressively. Her health failed quickly in the last four days of her life and the family was called to come see her. She is survived by her children Joseph Ashman (Carrie), Jeffrey Ashman (Connie), Amy King (Brian), and Michelle Kasper (Bill). She leaves behind nine grandchildren: Kristin, Jacob, Ashley, Casey, Kayla, Emily, Nicholas, Catherine Grace, and Joseph as well as two great grandchildren, Rourke and Annie. Marlene will be remembered as Mom, Momma, MA, Omi, and Deanie. She was so much more than the cancer that took her life.... Marlene will be sent for cremation under the direction of the Beasley-Wood Funeral Home.

Roberta Marlene Ashman of Mena, AR passed away peacefully on March 1, 2021 surrounded by her children and grandchildren. She was surrounded by her loved ones when she passed into His arms from ours. Marlene was born on April 26, 1940 in Mobeetie,... View Obituary & Service Information

The family of Mrs. Roberta Marlene Ashman created this Life Tributes page to make it easy to share your memories.

Roberta Marlene Ashman of Mena, AR passed away peacefully on...

Send flowers to the Ashman family.