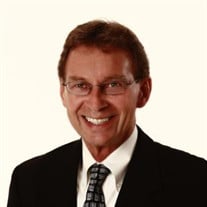 Dr. Richard Carver, age 80 of Mena, Arkansas passed away April 22, 2020 at his home. Rick was born March 28, 1940 in Mena, Arkansas to Richard Addison Carver and Frances Avery Finks Carver. He grew up in Mena but was a 1958 graduate of Lake Village High School, as his parents moved there for a short time. Rick grew up in a large loving family with 5 brothers and 1 sister. After graduation, he joined the Army National Guard for 6 years, which delayed his college career for 2 years. He attended Henderson State University before attending S. C. O. (Southern College of Optometry) in Memphis. His practice began with Dr. H. H. McRee in the Philpot Building before building his own office on Mena Street. The practice continued for 50 years before retiring due to illness. Rick served on the Mena Water Commission and the Union Bank Board for many years. He was a member of the Mena Lions Club, Elks Club, and the Mena Corvette Club. Rick considered his patients his friends. He was a Razorback fan, but the biggest fan of his family. He was married to Beth for 41 years and had 4 beautiful children: Kristi Wilson, Jonathon Carver, Dr. Adam Carver and London Pitchford. Lake Ouachita was his favorite place to go and he spent many years there with his parents and then his own family. Working on his home and yard, in his shop and keeping all the vehicles, tractors and mowers like new was his way of relaxing. Rick was known for being a kind, loving, generous gentleman. To know him was to love him, he will be missed. Survivors are: Wife: Elizabeth “Beth” Carver of Mena, Arkansas Sons: Jonathon Carver and wife Virginia of Reeds Spring, Missouri Adam Carver and wife Angela of Nixa, Missouri Daughters: Kristi Carver Wilson and husband Dr. Phillip of Mena, Arkansas London Carver Pitchford and Darron of Maumelle, Arkansas Grandchilden: Aaron Pasquinzo, Marc David Wilson, Rachel Wilson, Katherine Wilson, Leea Carver, Bodhie Carver, William Carver, Carver Pitchford and Lawson Pitchford. Brothers: David Carver Woodside of California Steve Carver of Fayetteville, Arkansas Special Caregiver: Ann Hughes of Mena, Arkansas He was preceded in death by his parents, Richard Addison Carver and Frances Finks Carver, Brother Bill Carver, Bob Carver and Mike Carver, sister Clayta Scott and a special nephew Win Warlaw. Graveside service will be Saturday, April 25, 2020 at 2:00 p.m. at the Pinecrest Memorial Park with Brother Victor Rowell officiating. Interment will follow under the direction of the Beasley-Wood Funeral Home.

Dr. Richard Carver, age 80 of Mena, Arkansas passed away April 22, 2020 at his home. Rick was born March 28, 1940 in Mena, Arkansas to Richard Addison Carver and Frances Avery Finks Carver. He grew up in Mena but was a 1958 graduate of Lake... View Obituary & Service Information

The family of Dr. Richard Carver created this Life Tributes page to make it easy to share your memories.

Send flowers to the Carver family.