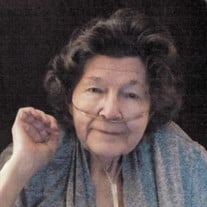 Rhonda Joan McCarley received her wings Monday, August 24, 2020 at 83 years of age. She was born on April 26, 1937 to Thomas Crume and Hazel Dodd Crume, both teachers, in Seneca, NM. She fell in love with Doyle McCarley in Quemado, NM and they wed April 24, 1954, eloping on the senior trip. She graduated from Quemado High School in the class of 1954. She and Doyle moved to Albuquerque soon after and raised their family. Their first daughter, Rhonda Faye, was born in May of 1955. Their second daughter, Janet Elaine, was born in January of 1960. Joan graduated from the University of New Mexico, class of 1970, and immediately began teaching 2nd grade at Matheson Park Elementary, eventually moving to 1st grade. She loved her students and they loved her. She taught there her entire career, retiring after 25 years. When her husband, Doyle, passed in 2003, she made the decision to move to the home they had purchased 45 years before in Grannis, Arkansas. She said, “Doyle set up that home for us to live in, and I’m going to live there.” She moved from their home in Albuquerque to her land in Arkansas in 2005 and enjoyed many hours on her deck watching the trees grow. She had a passion for reading all books and was an avid fiber artist. She made many afghans in her later years and loved to share them with her family and guests. She was a master at crossword puzzles and had a sharp sense of humor. She made sure her kids learned early to laugh even when things got hard, because It was so much more fun that way. If you spent any time with Joan, there was always much talking, laughing, drinking coffee, and sharing cake or treats. She loved to play cards and dominoes and was quite good at both. Joan was preceded in death by her parents, Thomas and Hazel (Dodd) Crume; her brothers, Thomas Crume, Elbert Crume, and Larry Crume; her husband, William Doyle McCarley; and her brother-in-law, Gordon Utah McCarley. Joan is survived by her daughters, Rhonda McCarley LaVail and husband Forrest, and Elaine McCarley Decker and husband, Gary; grandchildren, Jay Yeich, Joyce Yeich, Matthew Yeich, Leslie Yeich, Jessie Shultz Saxon and husband Robert, Robert (Larney) Shultz and wife Mary, Kellie Shultz Moua and husband Andrew; many great grandchildren, great-great grandchildren, nieces, nephews, cousins; and sisters-in-law, Faye McCarley Walters, Linda Crume, and Vicky Crume. She leaves behind a legacy of strength, humor, integrity, and feistiness. Cremation arrangements are under the direction of Beasley-Wood Funeral Home. No services are scheduled at this time.

Rhonda Joan McCarley received her wings Monday, August 24, 2020 at 83 years of age. She was born on April 26, 1937 to Thomas Crume and Hazel Dodd Crume, both teachers, in Seneca, NM. She fell in love with Doyle McCarley in Quemado, NM and they... View Obituary & Service Information

The family of Mrs. Rhonda Joan McCarley created this Life Tributes page to make it easy to share your memories.

Send flowers to the McCarley family.