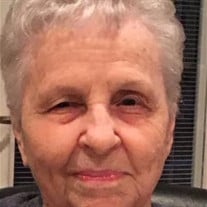 Peggy Lou Phillips age 94 of Mena passed away Tuesday, January 14, 2020 in Mena, Arkansas. Peggy was born in Cove, Arkansas on November 30, 1925 to the late William Ambrose Hensley, Sr. and the late Lotus Nettie Henderson Hensley. She was married to Ray Phillips until his passing. Peggy was a friendly people person and enjoyed being a greeter for Wal Mart until she was 85. She always had a smile for everyone she met. Most of all she loved her family and especially her grandchildren. Peggy was a member of Christ Community Fellowship Church. She was a loving and devoted mother, grandmother, great-grandmother, great-great- grandmother, and friend to all who knew her. She will be dearly missed. She is survived by: Son: Steve Phillips and wife Kathy of Mena, Arkansas Daughters: Cynthia Lou Buchanan of Mena, Arkansas Mitzi Peters and Ray Allen of Mena, Arkansas Grandchildren: Brian, Brandon, Amy, Mandy, Brandy, Billy, Ashley, Sarah, Jamie, and Angela. Twenty-six great grandchildren, five great-great-grandchildren and two on the way. Brother: Hugh Hensley and wife Shirley of Jacksonville, Arkansas Sister: Pat Fite of Athens, Georgia Sister-in-laws: Joan Thomas of Mena, Arkansas and Tillie Hensley of Louisana Brother-in-law:Sidney Phillips and wife Diane of Texarkana, Arkansas Numerous nieces, nephews and friends She was preceded in death by her parents, William and Lotus Hensley, husband Ray Phillips, brothers Kirby Hensley, Sess Hensley, W.A. Hensley Jr, Bert Hensley, and Bart Hensley and a grandson Joshua Phillips. Funeral service will be Saturday, January 18, 2020 at 10:00 a.m. at CCF Church in Mena with Brother Lance Sawyer officiating. Interment will follow in the Pinecrest Memorial Park under the direction of the Beasley-Wood Funeral Home of Mena. Family and friends visitation will be Friday, January 17, 2020 at Beasley Wood from 6:00-8:00 p.m. Pallbearers will be Brian Peters, Brandon Peters, Billy Sockey, Brent Sockey, Cauy House, and Hunter Johnson. Online obituary at www.beasleywoodfuneralhome.com

The family of Peggy Lou Phillips created this Life Tributes page to make it easy to share your memories.

Send flowers to the Phillips family.