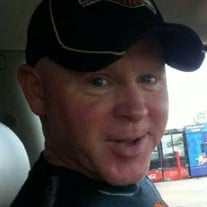 Michael “Snapper” Drannon Carpenter, age 55, passed away Sunday, September 26, 2021 in Tyler, Texas. He was born July 21, 1966 in Mena, Arkansas to the late Donald Carpenter and the late Lennis Sue Westmoreland. He was an officer for the Mena Police Department and the Grannis Police Department, then later was co-owner of Snappy-Mac’s Sports Bar. He worked for Chevron Pipeline as a chief inspector and was an avid motorcyclist. He had a passion for Harley Davidson bikes and built and worked on them as well as loving to ride with his club, The Gravediggers or on his own. He was a true character and once you knew him you would never forget him, and he will be genuinely missed. He is survived by his daughter Amber Fendley and husband Casey and their children Cloey, Sully, Averly, Cash, Carlin and Conlon; his father, Mac Westmoreland; his grandfather Harlan Carpenter; his Aunt, Sharon Jewell and husband Donnie; cousins Keith Ray and Misty Dearing; his former wife; Tina Kelley; and his former partner, Candon Burrell as well other family and friends too great to mention. He was preceded in death by his mother Lennis Sue Westmoreland, father, Donald Carpenter, maternal grandparents, JC and Isabel Ray and his paternal grandmother, Faye Carpenter. Funeral services will be Monday, October 4, 2021 at 10:00 a.m. at the Crossing Church with Brother Donnie Jewell officiating. Interment follows in Pinecrest Memorial Park under the direction of the Beasley Wood Funeral Home. Visitation will be Sunday evening, October 3rd from 6:00 to 8:00 p.m. at the funeral home.

Michael &#8220;Snapper&#8221; Drannon Carpenter, age 55, passed away Sunday, September 26, 2021 in Tyler, Texas. He was born July 21, 1966 in Mena, Arkansas to the late Donald Carpenter and the late Lennis Sue Westmoreland. He was an officer... View Obituary & Service Information

The family of Mr. 'Michael "Snapper" Drannon Carpenter created this Life Tributes page to make it easy to share your memories.

Send flowers to the Carpenter family.