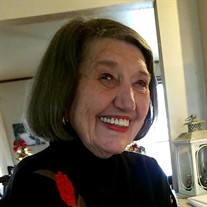 Mary Jo Maddox Abernathy, beloved wife, mother and “GranMary,” passed away peacefully on October 17, 2021 while visiting Lake Ouachita with her family, her favorite place on earth. Mary Jo was the first of four children born to Ruby and Ode Maddox on October 13, 1935 in Oden, Arkansas. She lived in Oden throughout her childhood years, where she attended the First Baptist Church of Oden and graduated from Oden High School, where her father was the Superintendent of schools and head basketball coach. During her high school years, she fell in love with Bill Abernathy, the star of the state championship basketball team coached by her father. Upon graduation from high school, Mary Jo attended Ouachita Baptist University in Arkadelphia prior to transferring to Arkansas State Teachers College (now the University of Central Arkansas) in Conway, where she graduated with a degree in Home Economics. She and Bill married in 1954, and began a lifetime journey together that is an inspiration to all who knew them. Upon graduating from college, Bill and Mary Jo moved to California where they both began their careers in public education. They returned to Arkansas after two years, and lived in Conway and Greenbriar before moving to Mena in 1972 when Bill was named Superintendent of the Mena School District. Mary Jo continued her career teaching Home Economics at Acorn High School for 15 years where her students meant the world to her and she touched the lives of many. Mary Jo and Bill resided in Mena for 48 years where they raised their three children and enjoyed many friendships. They were active in many aspects of the community during this time as members of the First Baptist Church of Mena and later Christ Community Church. Mary Jo served on the Board of the Western Arkansas Counseling and Guidance Center, and was a member of PTO. She also enjoyed her book club, the Book Worm Book Club, and her bridge club. She also taught bridge at Rich Mountain Community College. Drawing upon her own experiences, she also was a mentor and advisor to many individuals suffering from cancer. In her free time, Mary Jo enjoyed playing bridge, reading, spending time at Lake Ouachita and challenging anyone to a card game or game of dominos, where she won more often than not. She didn’t spare anyone her competitiveness, even her grandchildren. She also liked to have floating on your back contests and holding your breath under water contests at the lake where no one ever beat her. While not known for her culinary talents, she did have a few specialties including her famed chocolate gravy or her chocolate and peanut butter candy enjoyed by her children, grandchildren and their friends over the years. She also had an eccentric side to her and loved new adventures, such as convincing her nurse to take her for a Sunday drive in her Volkswagen Beetle on a logging road that turned into an ATV path which she somehow got her way out of and later loved to laugh about. She enjoyed life and lived it to the fullest. Mary Jo endured many illnesses later in life, starting with a bout with cancer in her early fifties which she successfully overcame with her will, determination and competitive spirit. She never complained, never felt sorry for herself and always maintained a positive, optimistic attitude. She had an open and caring heart and was interested in everyone she met. Enjoying her friends and family was the most important thing in life to her. Following Bill’s death in 2019, Mary Jo relocated to Bryant to be closer to her family. She resided at The Manor Senior Living Community where she was welcomed by her fellow residents and quickly made many new friends whose company she thoroughly enjoyed. Her friendly and outgoing attitude was quickly recognized by the staff at the Manor, where she received a Lifetime Achievement Award for being the most positive and influential person in residence. Mary Jo was preceded in death by her husband Bill Abernathy, her brother Edward Maddox and her parents, Ruby and Ode Maddox. She is survived by her three children, Robert Abernathy, and his wife, Ginger of Bryant; Richard Abernathy, and his wife, Paula of Bryant; Melinda Abernathy Stevenson, and her husband, John of Houston, Texas; her grandchildren, Renee Abernathy; Tyson Abernathy, and wife Heather; London Abernathy Creel, and husband Josh; Caroline Stevenson; Katherine Stevenson; and Mary Claire Stevenson, her namesake; and Annalise Robbins; her great-grandchildren, Saylor Abernathy, Lakelynn Creel, and Fisher Abernathy; her sister, Jamie Sue Maddox Goldspink of Creswell, Oregon, and husband Charles; her brother, David Maddox, and wife, Sue of Mena; and her sister-in-law, Janice Maddox Joyner, and husband, Bobby of Memphis. The family wishes to express its appreciation to the many medical care professionals who cared for Mary Jo on an ongoing basis over the past 35 years, and is especially grateful for the doctors and nurses at the University of Arkansas for Medical Sciences in Little Rock who provided world class, compassionate care for Mary Jo on many occasions throughout the years. A visitation will be held at Beasley Wood Funeral Home in Mena on Thursday, October 21st from 5:00-7:00 pm. A private memorial service is being held by the family. In lieu of flowers, memorials may be made to the University of Arkansas Rich Mountain Foundation, 1100 College Drive, Mena, AR 71953.

Mary Jo Maddox Abernathy, beloved wife, mother and &#8220;GranMary,&#8221; passed away peacefully on October 17, 2021 while visiting Lake Ouachita with her family, her favorite place on earth. Mary Jo was the first of four children born to... View Obituary & Service Information

The family of Mrs. Mary Jo Abernathy created this Life Tributes page to make it easy to share your memories.

Send flowers to the Abernathy family.