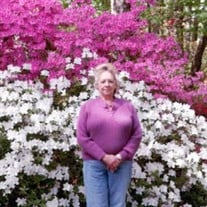 Linda Ruth Lance, age 81, of Mena, Arkansas passed away Saturday, April 24, 2021 in Hot Springs, Arkansas. She was born September 3, 1939 in Hatfield, Arkansas to Lee Barnett and Ola Parham Barnett. She was united in marriage to Charles Wayne Lance on February 16, 1963. Linda was a legal secretary by profession but was also known as the local Avon lady which she won a cruise for being such a great sales representative. She was a member of the Red Hot Hatties and Daughters of the American Revolution. Linda enjoyed watching westerns on television but truly enjoyed going to the Casino. She also enjoyed the company of her little miniature dachshunds, Belle and Annie. Above all, Linda loved the Lord and spending time with her family, especially her grandchildren. She was a loving wife, mother, grandmother and friend and will be dearly missed. She is preceded in death by her parents; her daughter, Melinda Cherie Lance; brothers, David Barnett, Wayne Barnett and infant brother Charles Barnett; sisters, Irma Shaw, Anita Belt, Norma Beauford, Mary Jo Rogers, Mardelle Hunter and Frances Jean Barnett. Linda is survived by her husband, Charles Wayne Lance of Mena, Arkansas; son, Jason Charles Lance and wife Ashlee Elizabeth of Springdale, Arkansas; daughter, Michelle Ruth Lance of Mena, Arkansas; grandchildren, Cherie Belle Smith and husband Nathan of Mena, Arkansas, Carlee Michelle Boehler of Mena, Arkansas; numerous nieces, nephews and a host of other relatives too great to mention. Funeral service will be Tuesday, April 27, 2021 at 2:00 p.m. at the United Pentecostal Church in Mena, Arkansas with Brother Jack Smith and Joe Hunter officiating. Interment will be in the Pinecrest Memorial Park under the direction of the Beasley-Wood Funeral Home. Visitation will be Monday, April 26 from 5:00 to 7:00 p.m. at the Beasley-Wood Funeral Home. Pallbearers will be Joe Hunter, John Belt, Tony Lance, Scott Sharman, Nathan Smith, and Bryan Langford. Honorary pallbearers will be the members of Abundant Life United Pentecostal Church and her Friday card playing buddies.

The family of Mrs. Linda Ruth Lance created this Life Tributes page to make it easy to share your memories.

Send flowers to the Lance family.