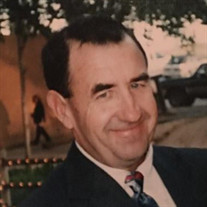 Larry Carl Benjamin, age 73, of Mena, Arkansas, passed away Saturday, October 24, 2020, at his home surrounded by his wife and children. He was born September 28, 1947, in Lubbock, Texas. Larry was raised on the family farm near Abernathy, Texas, before moving to Mena, Arkansas, and attending Acorn High School until his graduation in 1967. He was united in marriage with Stella Hill, his high school sweetheart and love of his life on January 20, 1968. Larry proudly served his country in the United States Air Force during the Vietnam War. He worked for the USDA’s Soil Conservation Service, now the Natural Resources Conservation Service, after being inspired by the lessons and stories he learned from his grandfather about surviving the Dust Bowl of the 1930s. After his retirement, Larry spent many years with his wife at their cabin in Blackfork, Arkansas, where he enjoyed hiking in the woods, roasting marshmallows, and riding 4-wheelers with his family. He served as a deacon of the Friendship Baptist Church as well as a board member of the Blackfork Volunteer Fire Department. Larry took great pleasure growing and canning vegetables from his garden, which he would often share with other neighbors in the community. He also enjoyed watching sports with his family, listening to old country songs, and talking to everyone he met. Above all, Larry loved the Lord. He was a loving husband, father, grandfather, brother, and friend. He will be dearly missed. He is survived by his wife, Stella Benjamin, his sons Rick Benjamin and wife Maureen of Forney, Texas, Ronnie Benjamin and wife Sherry of Mena, Arkansas, and Chad Benjamin of Floydada, Texas; Daughter Christy Robinson of Amarillo, Texas; grandchildren Shane Benjamin, Brennah Robinson, Adam Benjamin, Aubrey Robinson, Katherine Benjamin and Levi Benjamin; twin brother Jerry Benjamin; brother John Benjamin; and step-brother Bud Benjamin. He was preceded in death by his mother Dorothy Bain and his stepbrother Neil Benjamin. Graveside services will be held Thursday, October 29, 2020, at 1:00 p.m. at Haw Creek Cemetery in Black Fork, Arkansas. Visitation for family and friends will be held at Beasley Wood Funeral Home Chapel Wednesday, October 28, 2020, from 6 to 8 p.m. Donations in Larry's name can be made to the Blackfork Volunteer Fire Department at 38216 Blackfork Trl Mena, AR 71953

Larry Carl Benjamin, age 73, of Mena, Arkansas, passed away Saturday, October 24, 2020, at his home surrounded by his wife and children. He was born September 28, 1947, in Lubbock, Texas. Larry was raised on the family farm near Abernathy,... View Obituary & Service Information

The family of Mr. Larry Carl Benjamin created this Life Tributes page to make it easy to share your memories.

Send flowers to the Benjamin family.