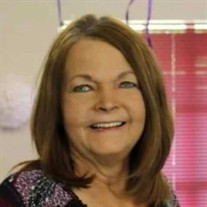 It is with great sadness that the family of Karen Louise Strout announces her passing on August 22, 2020 in her home surrounded by family. Karen, age 68, of Hatfield, Arkansas was born March 5, 1952 in Cherryfield, Maine to Alton and Lillian Strout. Karen was a hard worker all of her life. She loved horses, card games, bunco, crocheting, dancing, sport cars, and spending quality time with her close friends. She enjoyed early morning coffee visits with her local friends in the community. Her greatest accomplishments were her daughters and her grandchildren. She was a devoted and loving mother and grandmother. Karen was always thinking of others, donating to those in need and volunteering within the community. Up until her very last appointment at Genesis Cancer Center, Karen was bringing donuts and breakfast sandwiches to her doctor and nurses. She wanted to make sure that they knew how much she appreciated them. She was always willing to lend a helping hand to those in need. She is survived by her parents, Alton and Lillian Strout of Milbridge, Maine; boyfriend of 28 years, Ronnie Ward; daughter, Brandy Mccoy and husband Randal of Hatfield, Arkansas; daughter, Jodie Mesko and husband Rich of Siloam Springs, Arkansas; brother, Garry Strout and wife Janet of Auxvasse Missouri; sister, Diane Robinson and husband Wade of Marshfield, Maine; sister, Peggy Strout of Goldsboro, Maine; grandson, Cody Mccoy and wife Erin of Hatfield, Arkansas; grandson, Austin Mccoy of Hatfield, Arkansas; granddaughter, Katie Mesko of Siloam Springs, Arkansas; granddaughter, Eliza Mesko of Siloam Springs, Arkansas; and grandson, Kaleb McCoy of Hatfield Arkansas. She was also anxiously awaiting her first great grandchild due in November. Karen is also survived by her best friend, David Putman; and a host of nieces, nephews, and close friends. Karen is preceded in death by her loving husband, Tommy Colson of Hatfield, Arkansas. A Celebration of Karen's life will be held on Saturday, August 29th at 11:00 AM at Hatfield First Baptist Church, Hatfield, Arkansas with Reverend Ron Tilley officiating. Honorary Pall Bearers include, David Putman of Hochatown, Oklahoma, Bob "Bobbie" Merchant of Ava, Missouri, John Merchant of Dixmont, Maine, and Wayne Fairless of Smithville, Oklahoma. Memorial donations in memory of Karen may be made to Genesis Cancer Center, 133 Harmony Park Circle, Hot Springs, AR 71913. Arrangements are under the direction of Beasley-Wood Funeral Home in Mena, Arkansas.

It is with great sadness that the family of Karen Louise Strout announces her passing on August 22, 2020 in her home surrounded by family. Karen, age 68, of Hatfield, Arkansas was born March 5, 1952 in Cherryfield, Maine to Alton and Lillian... View Obituary & Service Information

The family of Mrs. Karen Louise Strout created this Life Tributes page to make it easy to share your memories.

It is with great sadness that the family of Karen Louise Strout...

Send flowers to the Strout family.