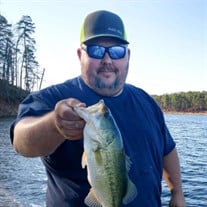 Jonathan “Scotty” Barrett, age 36, of Vandervoort, AR went to his heavenly home on January 26, 2021. He was born on June 17, 1984 in Mena, AR. Jonathan was a Godly man, a loving husband, and an amazing father. He loved all his family so very much. His love of Sooner football compared to none. He was an avid hunter and fisherman. He graduated from Tulsa Welding school and worked as a supervisor at Baker Refrigeration for many years, he loved his job. He was a faithful member of the Vandervoort First Baptist Church most of his life. He radiated any time he talked about or was with his wife and daughter. Jonathan lived a full life; he never met a stranger. His other hobbies included golf, cooking, and spending time with his friends and family. Jonathan is survived by his wife, Summer Barrett, and daughter, Leighton Barrett of Vandervoort, AR; parents, John and Marilyn Barrett of Vandervoort, AR; sister, Rebecca Emerson and husband Aaron of De Queen, AR; in-laws, Mike and Christy Thomas of Simms, TX, and Edward and Jerri Pulley of Naples, TX; nieces and nephews, Alexis and Braxton Emerson of De Queen, AR, Colt Green of Simms, TX, and Blair Thomas of Elkhart, TX. Jonathan is preceded in death by his brother, John Travis Junior Barrett; paternal grandparents, John and Virginia Barrett; maternal grandparents, Junior and Dorothy Jewel; and aunt, Bonnie Sue Barrett. Visitation will be Saturday, January 30, 2021 from 5:00-7:00 p.m. at the First Baptist Church in Vandervoort. A graveside service will be held 2:00 p.m. Sunday, January 31, 2021 at Witherspoon Cemetery in Vandervoort, Arkansas with Brother Aaron Anglin officiating. Arrangements are under the direction of Beasley-Wood Funeral Home. Pallbearers are Clay Watkins, Travis Sones, Kyle Stauffer, Michael Apple, Kenneth Watkins, and Joey Watkins. Honorary Pallbearers are his work crew, Brian Ison, Ted Magill, Daniel Kendall, Brandon Lawler, Task Keeling, Austin McNeely, and Trey Sims.

The family of Mr. Jonathan "Scotty" Barrett created this Life Tributes page to make it easy to share your memories.

Send flowers to the Barrett family.