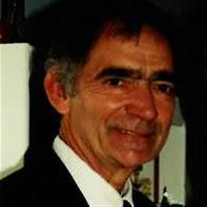 Jesse Thomas Cogburn, Jr, age 80, of Mena, died February 6, 2022 at Mena Regional Hospital. He was born on July 16, 1941, to Jesse Cogburn Sr and Alla Mae Clark Cogburn. He was married to Fran Cogburn for 43 years until her death in 2015. In September 2021, he married Sally Henry. He was Advertising Director for The Mena Star for 27 years. After retiring, his good friend Jerry Jeffcoat talked him into working at Wal-Mart. There, he managed the Photo Lab for several years and finally retired after 22 years. Jesse was very active in the community for most of his life and volunteered his time and talents whenever it was needed. He was active in the Jaycees as well as a founding member of the Optimist Club and coached many kids through the years. He was a long-standing member of the Knights of Columbus and a member of the Parish Council at St. Agnes Catholic Church, where he was a member for many years. Jesse never met a stranger. He touched the lives of so many with his kindness and compassion. He had a heart for kids and loved a good fundraiser, where he had an opportunity to make a difference in someone’s life. He was an amazing daddy and a good man. He will be missed by many. Jesse is preceded in death by his parents; brother, Larry Cogburn; his wife, Fran and Brother-in-Law, Bud. He is survived by his current wife, Sally; sister, Sharon and husband Robert; his children, Patrick and wife Renay, Tami and husband Greg, Toni and husband John, Marlena, Tommye Rae and husband Leon; step children, Danny and wife Clara, Gregg and wife Tammy, Shane and wife Loretta; son-in-Law, Donny and wife Jody and the son he claimed, Keith; his Alabama family that he loved dearly; brothers-in-Law Johnny and wife Dora, Danny and wife Carol; sister-in-Law, Jan and husband Jimmy; and a host of cousins, nieces and nephews. Between his kids and step kids, he amassed 22 Grandchildren and 27 Great Grandchildren. Graveside services will be Friday, February 18, 2022, at 2:00 p.m., at Mt. Calvary Cemetery officiated by Brother Victor Rowell and Deacon Tony Salamone, under the direction of Beasley-Wood Funeral Home. Online obituary at www.beasleywoodfuneralhome.com

Jesse Thomas Cogburn, Jr, age 80, of Mena, died February 6, 2022 at Mena Regional Hospital. He was born on July 16, 1941, to Jesse Cogburn Sr and Alla Mae Clark Cogburn. He was married to Fran Cogburn for 43 years until her death in 2015. In... View Obituary & Service Information

The family of Mr. Jesse Thomas Cogburn Jr. created this Life Tributes page to make it easy to share your memories.

Send flowers to the Cogburn family.