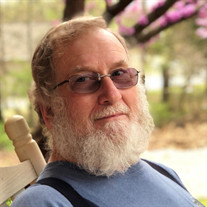 Jay Travis Rodgers, age 68, passed into Heaven on July 17, 2019. He was a resident of Bella Vista, Arkansas, but lived and worked most of his life in Mena Arkansas. He passed away in Mena while visiting friends. Jay Rodgers was born in Brackettville Texas on August 17, 1950 to James Travis Rodgers and Lela Grace Brown Rodgers. He is survived by his beloved wife, Joyce Kaufman Rodgers, two beautiful daughters, Lecia Hoover and Lydia Rodgers, and three adored grandchildren, Jazmin Rodgers, Violet Rodgers and Michael Stidham. His fourth grandchild will be born to Lecia and Ryan Hoover in November. He is also survived by his siblings, Rhonda Rodgers, Tim Rodgers, Lorna Rodgers Long, Kenneth Shamburger, Katheryn Shamburger Davis and Melissa Rodgers Rossborough. He was preceded in death by his younger sister Amelia Rodgers and his parents. Jay is remembered as a generous and kind humanitarian, loving family man, and antique car enthusiast. He was a gifted musician and poet, and many were blessed by his talents. He was a member of the Ouachita Little Theater where he performed in numerous productions and plays, some alongside his daughter Lecia. He was a well-spoken and educated man who received a Master's Degree from Henderson University in Arkadelphia. He devoted 38 years to serving the people of Polk County through the Department of Human Services. Jay could be found ringing the bell for Salvation Army every Christmas season, and this remains one of his most cherished ways to give back to a community that he loved and called home. Among many things, he was a life long Baptist. Jay Rodgers’ life and legacy are built around compassion for his family and service to the needy. He will be greatly missed by many. Jay would be proud to have donations made in his memory to the Ouachita Little Theater or the Salvation Army. Funeral service will be Saturday, July 20, 2019, 2:00 p.m. at Ouachita Little Theater in Mena, Arkansas with Pastor Davis Thompson officiating. Interment will follow in the Pleasant Grove Cemetery in Cove, Arkansas under the direction of the Beasley Wood Funeral Home of Mena. Online obituary at www.beasleywoodfuneralhome.com

Jay Travis Rodgers, age 68, passed into Heaven on July 17, 2019. He was a resident of Bella Vista, Arkansas, but lived and worked most of his life in Mena Arkansas. He passed away in Mena while visiting friends. Jay Rodgers was born in Brackettville... View Obituary & Service Information

The family of Jay Travis Rodgers created this Life Tributes page to make it easy to share your memories.

Send flowers to the Rodgers family.