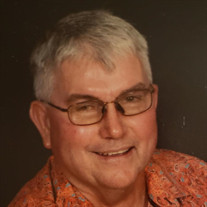 James Morris Watkins, age 65, of Vandervoort, Arkansas passed away Monday, August 10, 2020 in Texarkana, Texas. He was born on March 8, 1955 in Mena, Arkansas to Morris Dale Watkins and Bertha Lillian (Daniels) Watkins. Morris was a kind, gracious, and humble man, who lived life full and blessed with a large loving extended family, especially his beloved Cindy, Luke, and Clay. He was a logger, farmer, and avid outdoorsman who loved camping and cooking outdoors. He and Cindy built their family home on the site where his grandparents lived. They exceled in welcoming family and friends throughout their 47 years. He will be dearly missed. He is survived by his wife Cindy, of the home; sons, Lucas Wade Watkins and wife Lindsey of Vandervoort, and Clayton Lee Watkins and wife Debra of Vandervoort; grandchildren, Levi, Kaylee, Landon, Kensleigh, Easton, and Talynn; mother, Bertha “Tinker” Watkins of Vandervoort; sister, Mary Leandra “Tooter” Putty of Hico, Texas; brother, Larry Watkins of Vandervoort; exchange students, Marzena, Michael, Ninja, Edward, and Hani; and a host of friends. Morris was preceded in death by his father, Morris Dale Watkins; and brother, Phill Watkins. A funeral service for Mr. Watkins will be held 10:00 am Saturday, August 15, 2020 at the First Baptist Church in Cove, Arkansas with Bro. Ron Ladd officiating. Interment will follow in Center Cemetery in Vandervoort. Pallbearers are Frank Hoyle, Ray Bailey, Bill Barrett, Randy Milam, Chuck Bell, and Raymond Dees. Honorary pallbearers are Terry Scott and Tim Scott. Visitation at the funeral home will be general. A scheduled visitation will begin at 9:30 am at the church prior to the service on Saturday. Arrangements are under the direction of Beasley-Wood Funeral Home in Mena, Arkansas.

The family of Mr. James Morris Watkins created this Life Tributes page to make it easy to share your memories.

Send flowers to the Watkins family.