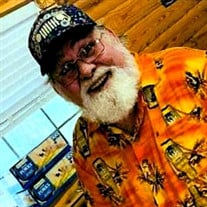 James F. “Frankie” Holliday, age 68, of Mena, Arkansas passed away Thursday, December 24, 2020 at his home. He was born January 20, 1952 in Mena, Arkansas to the late Glenn Allen Holliday and Betty Sue (Woods) Holliday. Frankie was a longtime Mena resident. He was united in marriage to Willie Frederick on January 1, 1994. He adored her, and they loved going dancing. He worked for many years for U.S. Motors. Frankie was an avid antique car collector and he loved going to car shows. He also enjoyed collecting knives. Frankie was known as a prankster, he always found humor in every situation. He enjoyed going to the lake and made many memories there with his family, whom he loved dearly. He was saved and baptized and was of the Baptist faith. Frankie is survived by his wife, Willie Holliday of Mena; son, James F. Holliday Jr. of Cabot, Arkansas; daughters, Jennifer Tipton and husband Randy of Beebe, Arkansas, and Marcie Hennings of Texarkana, Arkansas; brother, Ricky Holliday Sr. and wife Sara of Mena; sisters, Barbara Tabor and husband Ron of Mena, and Glenda Keener; grandchildren, Nicholas Hennings, Max Holliday, Addison Holliday, Brandon Tipton, Brianna Tipton, Brian Tipton, Makayla Armstrong, and Jamie Tipton; great grandchildren, Sebastian Hennings, Sawyer Tipton, and Layklyn Armstrong. He is preceded in death by his parents; his brother, Jerry Holliday; and his sister, Deborah June Lewis. Graveside service will be 2:00 pm Monday, December 28, 2020 at Board Camp Cemetery with Rev. Lewis Martin, and Dwight Douglas officiating. Visitation is general. Services are entrusted to Beasley Wood Funeral Home.

The family of Mr. James F. "Frankie" Holliday created this Life Tributes page to make it easy to share your memories.

Send flowers to the Holliday family.