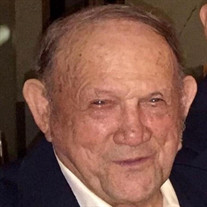 James L. “Jimmy Lloyd” Barton, age 90, of Mena, Arkansas, died December 13, 2020 in Ft. Smith, Arkansas. He was born on January 3, 1930 to the late William and Lula Barton in Cherry Hill, Arkansas. Jimmy Lloyd was an Army Veteran. He graduated from Arkansas State University with a degree in Agriculture and Animal Science. He excelled in track and basketball there and was the Arkansas Intercollegiate Champion in the mile run. He was a former teacher, basketball, and track coach at Cove, AR. He coached two runners to the Arkansas Meet of Champions where they both won medals. He was a Field Service Man for AVI for fifteen years and retired as Lead Parts Inspector at U.S. Motors. He was a father, mentor, and friend to many and even a legend to some. He is survived by his sons, Jim F. Barton, Rick Barton and wife Sonya, Steve Barton and wife Cathy, and Billy Barton and wife Virginia; daughter, Luann Nogle and husband Mick; grandchildren, Jamie Barton Wagner, Kimber Barton Still, Chris Barton, April Barton, Stephen Barton, Amber Cobb, Shawn Christianson, Megan Hoyle, B.J. Barton, Cody Barton, Jonathan Barton, Drew Barton, Tiffany Barron, Matthew, Ryan, and Erin Taurianen; 32 great grandchildren; sister, Mary Barton Holland; and special friend Clodean Gilley. He is preceded in death by his parents; wife, Charlotte Barton; son, Larry Barton; sister, Ethel Elliott. There will be a private family graveside service under the direction of the Beasley Wood Funeral Home. A memorial service will be held at a later date. Visitation is general.

The family of Mr. James Barton created this Life Tributes page to make it easy to share your memories.

Send flowers to the Barton family.