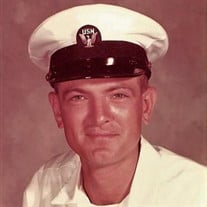 Mr. Henry David Howard, age 66, of Broken Bow, Oklahoma passed away Friday, August 14, 2020 at his home in Mena. Henry was born June 26, 1954 in Joplin, Missouri to Virgil Howard and the late Willa Ryals Howard. Mr. Howard was raised in Broken Bow, Oklahoma; and after graduating from high school he embarked on his 21-year Naval career. Henry retired from the United States Navy in 1996. He served time in the Navy as an aircraft mechanic some of which was in Desert Storm. Henry loved his time in the Navy and serving his country. He was a loving son, father, grandfather, brother, and friend who will be dearly missed by all that knew him. He is survived by: Son: Jonathon Howard Daughters: Jennifer Wood Amy Howard Grandchildren: Chris Wood, Rebecca Wood, Kaylie Wood, Ashlyn Belk, Brayden Belk, Scarlet Howard, Caden Howard, Grant Howard, Colten Howard, and Weston Howard Father: Virgil Howard Brother: Randy Howard and wife Cheryl Sister: Lanelle Brand and husband Stephen Numerous nieces, nephews, and a host of relatives and friends. Henry was preceded in death by his wife; Carolyn Howard and his mother; Willa Howard. Mr. Howard has been sent for cremation under the direction of Beasley Wood Funeral Home of Mena. Henry will be buried at sea at a later date.

The family of Mr. Henry David Howard created this Life Tributes page to make it easy to share your memories.

Send flowers to the Howard family.