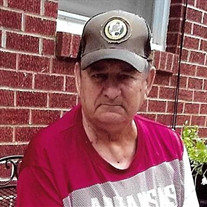 Henry Cogburn age 70 of Mena, Arkansas passed away Friday, January 24, 2020 in Mena. Henry was born on August 30, 1949 in Hopper, Arkansas to the late Arthur Cogburn and the late Recie Cogburn. He married Donna Foster on October 29, 1971. Henry proudly served his country in the United States Navy. He thoroughly enjoyed being outdoors hunting and fishing. Henry was a loving and devoted husband, brother and friend to all who knew him. He will be dearly missed. He is survived by: Wife: Donna Cogburn of Mena, Arkansas Brother: Dean Cogburn and wife Joy of Mena, Arkansas He was preceded in death by his parents Arthur and Recie Cogburn, three brothers, Doice Cogburn, and Roy Cogburn, Daniel Cogburn, and a sister Rose Proch. Funeral service will be Tuesday, January 28, 2020 at 2:00 p.m. at Beasley-Wood Chapel with Brother Steve Ellison officiating. Interment will follow in the Brushy Cemetery in Oden, Arkansas under the direction of the Beasley-Wood Funeral Home of Mena. Visitation will be one hour prior to service at Beasley-Wood. Pallbearers will be Larry Scheeler, Rick Foster, James Armor, Michael Cross, Gary Winkley and Carl Foster, Jr. Honorary pallbearers are his “Best Buds”, Charlie Brown, Mac Westmoreland, Tommy Earhart, Aaron Whisenhunt and Kelly Galloway. Online obituary at www.beasleywoodfuneralhome.com 08/30/1949

The family of Henry Cogburn created this Life Tributes page to make it easy to share your memories.

Send flowers to the Cogburn family.