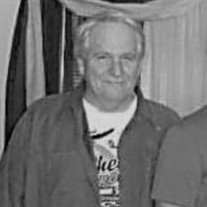 Harold Ray Riley, age 75 of Mena, Arkansas, passed from this life on Sunday, May 17, 2020 at his home surrounded by his family. Harold was born on August 23, 1944 to Nauflett Riley and Alma Ray (Crossland) Riley. He was united in marriage to Dee-Dee (Boeving) Riley, or as Harold called her, “Baby Cakes”, for 53 years. Harold attended the first vocational college in Arkansas, located in Pine Bluff, and became an Automotive Instructor. He taught at Rich Mountain Vo-tech and had numerous students throughout the years. After his retirement, Harold and his son Bear built his automotive shop, Riley’s Auto Air, that he maintained for many years. Harold’s passion was street rodding and re-building old cars. He and Dee-Dee helped his dear friend Mark Campbell put on the Mena car show for forty years. They made many friends all over the nation attending rod runs. Harold was also a bass guitar player in several bands including “Weird Harold and the Rubber Band” and “Jokers Wyld”. He was an antique toy collector, loved marbles, and was a member of the Elks Lodge. Harold started a tradition of finding four leaf clovers with his children that has continued with his grandchildren and great-grandchildren. He will be dearly missed by all who knew him. Harold is survived by his wife, Dee-Dee of the home; son, Bear Riley and wife Donna of Broken Bow, Oklahoma; daughter, Christi Horton and husband Brian of Missouri; grandchildren, Devin, Angel, Brent, Logan, Tyler, Taylor, and Lacey; great-grandchildren, Cooper and Oliver Riley, Izabelle, Landon, and Spencer; brother, Clark Riley of Utah; sister, Doris Short of Virginia; nieces and nephews, Jennifer Stewart and husband Scott, Phillip Riley, Ronnie Short, James Short, Mike Short, Steve Short, T.J., Justin, Andrew, Matt, and Emily; numerous great nieces and nephews; brother-in-law, Jody Boeving; and sister-in-law, Star Geoghahn. He was preceded in death by his parents; a brother, Claude Gene Riley; brothers-in-law, Jimmy Short and Timmy Boeving; and nephews, Josh Boeving and Jacob Sperry. A Celebration of Life Memorial Service will be held at a later date with arrangements entrusted to Beasley Wood Funeral Home. In lieu of flowers, Mr. Harold requested that donations be made in his memory to the American Cancer Society or to the St. Jude Children’s Research Hospital.

Harold Ray Riley, age 75 of Mena, Arkansas, passed from this life on Sunday, May 17, 2020 at his home surrounded by his family. Harold was born on August 23, 1944 to Nauflett Riley and Alma Ray (Crossland) Riley. He was united in marriage... View Obituary & Service Information

The family of Mr. Harold Ray Riley created this Life Tributes page to make it easy to share your memories.

Harold Ray Riley, age 75 of Mena, Arkansas, passed from this...