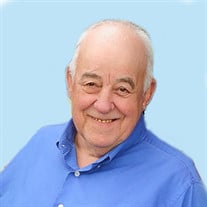 Harold Gene Deramus, 84 years old of Mena, Arkansas died on Sunday, May 10, 2020. He passed on to his heavenly reward surrounded by his loving family while at home from complications of Parkinson’s and Alzheimer’s disease. Harold was born on February 17, 1936 in Los Cruses, New Mexico to Arvin and Willa Taylor Deramus. He was the brother of Sharon Deramus Bailey of California and the late Betty Deramus Harper. He graduated from Arvin High School in 1954. On December 19, 1955 he married his high school sweetheart, Carol Louise Avilez, of Arvin, California when he was 19 and she was 15. They were married for 64 ½ years. He started his work career in California as a tree trimmer. He later began building swimming pools and went on to start a pool cleaning business, which he later sold when he moved his family from California to Mena, Arkansas. He began his work career in Arkansas as a chicken farmer and cattleman. He also helped his uncles in the logwoods using mules to skid the logs to the trucks. In 1979 he began a long career as a carpenter. He built houses all over Mena and the surrounding area. He finished his work career as a cement contractor and he was still finishing cement when he was 79 years old. He was known around town as an extremely hard worker, worthy of hire. He was a member of the Mena Street Church of Christ, where he was a song leader and bible class teacher and on occasion he was known to fill in as a preacher. Harold was a teacher, not a formal teacher but an informal teacher of life skills. He spent his entire life working and teaching his children, grandchildren, and great grandchildren the value of hard work and living for Christ. He lived Deuteronomy 6:6-7; faith and family made up his foundation. He lived by example and when warranted a very firm hand! Harold was a quiet man who took his responsibilities and obligations seriously. He didn’t talk a lot but he had a few sayings that his family will remember and carry with them all the days of their lives. He most often said, “Where there is the opportunity, there is the obligation”. Dad was the spiritual rock thrown into a pond…the ripples will go out from generation to generation. Harold is survived by his wife, Carol Deramus of Mena, Arkansas; his daughter, Mary Holland and husband Jack Holland of Mena, Arkansas; his son, Danny Deramus and wife Robbie of Judsonia, Arkansas; his daughter, Cindy Turner and husband Steve Turner of Murfreesboro, Arkansas; his daughter, Debbie Caster and husband Charlie Caster of Greenwood, Arkansas; Bob Blackburn his brother in Christ of Camden, Arkansas; Sixteen grandchildren; Launa Erskin, Bobby Blackburn, Christa Divis, David Holland, Wes Dowdy, Brent Erskin, Rebecca Davis, Jackie Scoggin, Andrew Dowdy, Kimberly Austin, Trey Caster, Jason Deramus, Anna Fultz, Jessica Coffey, Devin Brown and William Caster and 28 Great Grandchildren. He is proceeded in death by: his father, Arvin Deramus; his mother, Willa Deramus; his sister, Betty Deramus Harper; his brother-in-law, who was as a son to him, George Avilez and his Great Granddaughter, Addison Phoenix Dowdy. His memorial service will be held on Saturday, May 16, 2020 at 2:00 pm at the Beasley Wood Funeral Home Chapel. His son, Danny Deramus and his grandson, Bobby Blackburn will be the officiants and his grandsons, David, Wes, Brent, Andrew, Trey, Jason and William will be honorary pallbearers. A private family inerment will be held at the Cherry Hill cemetery in Cherry Hill, Arkansas. The family would like to extend a very special thank you to his caregivers, Sheila Hanson and Debbie Alley. Precious in the sight of the Lord is the death of one of his saints, Psalms 116:15.

Harold Gene Deramus, 84 years old of Mena, Arkansas died on Sunday, May 10, 2020. He passed on to his heavenly reward surrounded by his loving family while at home from complications of Parkinson&#8217;s and Alzheimer&#8217;s disease. Harold... View Obituary & Service Information

The family of Mr. Harold Gene Deramus created this Life Tributes page to make it easy to share your memories.

Send flowers to the Deramus family.