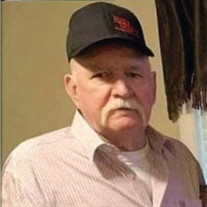 Glen Alex “Al” Tunnell, 76, of Smithville, Oklahoma passed away Friday, January 7, 2022 at his home surrounded by his family, who loved him dearly. Al was born in Watson, Oklahoma, to the late Benjamin Everett Tunnell and Mabel Estell Burk-Tunnell. He was united in marriage to his high-school sweetheart, Wanda Lougena Phillips, on May 24, 1968. Al was a proud Vietnam vet. His passion was logging. He was known to many as “Okie” and was the owner of Tunnell Trucking. He spent most of his life hauling logs and working in the log woods. Prior to this, he worked as an X-Ray Technician on the pipeline, where he made numerous friends. When he wasn’t working, he was probably listening to George Jones, drinking coffee with his buddies, or spending time with his four children. In his later years, his pride and joy were his grandchildren and great-grandchildren, who all knew him as “Poppy”. He was preceded in death by his sisters, Sue Jordan and Gayle Jones, and brothers, Jerry Tunnell and Herald Tunnell, and daughter Tanya Denton. He is survived by his wife of 53 years, Wanda Tunnell of Smithville, OK; daughters, Tina Hudson and husband Shane Hudson of Smithville, OK; Kim Larucci and husband John Larucci of Mena, AR; and Aaron Tunnell and wife Jessica Tunnell of Acorn, AR; grandchildren, Tyler, Cameron, Tanner, Alaina, Kiersten, Lucas, Regan, Brantlee, and Tessa; great-grandchildren, Hazely, Silas, Hayden, Cleo, Grayson, and Everly. He is also survived by his sisters Norma Fields and husband Glenn, Elsie Cook and husband Paul, Shirley Capehart and husband Jerry Don; sister-in-law Anna Sue Tunnell; brothers, Larry Tunnell, and a host of nieces and nephews that were all special to him. Graveside services will be Monday, January 10, 2022 at 2:00 p.m. at Smithville Cemetery with Brother Victor Rowell officiating under the direction of Beasley-Wood Funeral Home. Visitation will be at the Beasley-Wood Funeral Home Chapel on Sunday, January 9, 2022 from 6:00 p.m. – 8:00 p.m.

Glen Alex &#8220;Al&#8221; Tunnell, 76, of Smithville, Oklahoma passed away Friday, January 7, 2022 at his home surrounded by his family, who loved him dearly. Al was born in Watson, Oklahoma, to the late Benjamin Everett Tunnell and Mabel... View Obituary & Service Information

The family of Mr. Glen A. Tunnell created this Life Tributes page to make it easy to share your memories.

Send flowers to the Tunnell family.