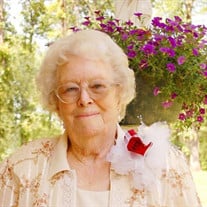 Flora Louise Murray, age 97, of Hatfield passed away Friday, September 17, 2021, at her home surrounded by her loving family. On July 10, 1924 Flora "Louise" Winfield Murray was born to Wilburn and Janetta Fortner. She was raised on a small farm between the banks of the Buffalo Creek and Mt. Clair Road, just southeast of Cove. Like many of her generation the family worked the farm to make a living in whatever manner they could. Her "Papa" raised blackberries and sold to a local cannery, chickens to sell the eggs to the local store, hogs to slaughter for meat, cows and goats for their milk and a huge garden where "Mama" would can all their vegetables for the upcoming year. (A chore that Louise carried on throughout her life until approximately 94 years of age). A simple, although sometimes hard life, but filled with fond memories, and good times. Louise attended all 12 years of school at Cove School. She graduated with the class of 1942 as Valedictorian, and until present, was the oldest living graduate of the school. As was common for that time, the communities held "get togethers", or socials. The neighbors down the road, Joe and Rosie Winfield, happened to have a handsome young son named Edward and in the spring of her senior year of high school, Ed and Louise got married. Not long after that, Ed was called into the Air Force and their journey away from home began. Stationed in many different places throughout the states and in Puerto Rico, it was always their hope and dream to return home to raise their family. After Ed finished his first enlistment, they returned home and purchased a small farm just down from where they were raised. But jobs were few and it was hard to support his family so Ed re-enlisted and the family once again moved away. In June of 1950, while stationed out of Savannah, Georgia, Ed was tragically killed in an airplane crash. Louise, with her 3 young children moved back home to Arkansas. In 1955, she married Irvin Murray. They moved to a family farm near Six Mile Creek just south of Hatfield. Two more children were added to the family and they remained there until all the children were raised. Irvin preceded her in death in 1976. She is also preceded in death by her parents, her sister Opal Seigler, brothers, Otis, Owen and JN Fortner. She is survived by her children Larry Winfield of Hatfield, Carolyn Cassada and husband Jim of Ola, Steve and Nancy Winfield of Mena, Stanley Murray of DeQueen and Rita Keener and husband Terry of Mena. She was a loving Nanny/Granny to 15 very special and cherished Grandchildren, 25 Great Grandchildren, 21 Great Great Grandchildren and 2 Great Great Great Grandchildren. Beloved Aunt Louise, Aunt Weez, to a host of nieces and nephews. Louise was an active member for more than 70 plus years at Emmanuel Missionary Baptist Church, Cove. She did not miss an opportunity to attend a service and made sure her children were in tow. To know that her children and grandchildren loved the Lord brought her true joy and peace. She taught many children in Sunday School, Vacation Bible School and was Church Secretary for many years. She was also a 50 plus year member of Mt. Meadow Chapter of Eastern Star, where she held many different chapter stations. Graveside service will be held 2:00 p.m., Thursday, September 23, 2021, at Pleasant Grove Cemetery in Cove, Arkansas. Interment will follow under the direction of Beasley-Wood Funeral Home. Visitation will be general. Pallbearers will be her Grandsons. Honorary Pallbearers will be Hershel Bell, Chuck Bell, Jack Peebles, Calvin Fairless, Danny Davis and Bryan Maye. In lieu of flowers, donations may be made in her honor to Cossatot Senior Adult Center or to Arkansas Children's Hospital. Proverbs 31:28, Her children rise up and call her blessed; (v29) Many daughters have done well, But you excel them all. (v30) Charm is deceitful and beauty is passing, but a woman who fears the LORD, she shall be praised.

Flora Louise Murray, age 97, of Hatfield passed away Friday, September 17, 2021, at her home surrounded by her loving family. On July 10, 1924 Flora "Louise" Winfield Murray was born to Wilburn and Janetta Fortner. She was raised on a small... View Obituary & Service Information

The family of Flora Louise Winfield Murray created this Life Tributes page to make it easy to share your memories.