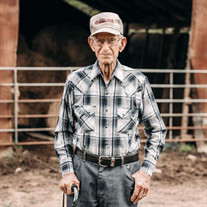 Mr. Everett Washington Howard, 95, of Mena, Arkansas, passed away Thursday, April 8, 2021 in Mena. He was born November 25, 1925 in Cherry Hill, Arkansas to the late Marian P. Howard and the late Willie Hess Howard. He was married to the love of his life, Gracie Susan Hackney Howard on March 27, 1948, and would always say how beautiful she was up until the day he passed away. He retired from Mid-South Lumber Company and was also a rancher. Everett loved ride his tractor and just got a new one after replacing the one he had for over 50 years! He also loved reading Louie Lamar western books and enjoyed watching the deer come out from the woods. He served his country in the United States Army, and was a loving husband, father, grandfather, great-grandfather, brother and a friend to all he knew. He is survived by his children, Freda Galyen and her children Lynn, Fred and Threasa, Rodger Howard and wife Pat and their children Nathan and Rodney, Wesley Howard and wife Debbie and their children Danny and Deanna and step son, Peter Barksdale and Eulene McCulley and husband Larry McCulley and their son Larin McCulley and a brother, Ola Gene Howard, and a host of great grandchildren, great-great-grandchildren and other family members too numerous to mention. He was preceded in death by his parents, his wife, 4 brothers, and their wives, Curtis and Molly Howard, Otis and Melba Howard, Frank and Mardge Howard, and Virgle and Willa Mae Howard, and 2 sisters, Twinkle Pollard and Brenice Howard. Graveside services will be Thursday, April 15, 2021 at 2:00 p.m. at Pine Ridge Cemetery with Brother Kenny Posey and Brother Randy Deramus officiating under the direction of Beasley Wood Funeral Home. Visitation will be general. Pallbearers will be Nathan Howard, Nick Wolfenbarger, Jonathan Travis and Ken Sherman

Mr. Everett Washington Howard, 95, of Mena, Arkansas, passed away Thursday, April 8, 2021 in Mena. He was born November 25, 1925 in Cherry Hill, Arkansas to the late Marian P. Howard and the late Willie Hess Howard. He was married to the love... View Obituary & Service Information

The family of Mr. Everett Washington Howard created this Life Tributes page to make it easy to share your memories.

Send flowers to the Howard family.