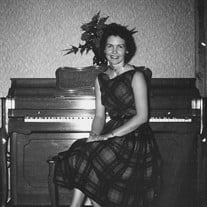 Ethel Jane Donica passed away Thursday, October 3rd, 2019, in Franklin, TN, just south of Nashville, after a long and arduous battle with Parkinson’s Disease. Mrs. Donica is survived by her four children, Dr. Cynthia Ann Perkins of Nashoba, Oklahoma, Sherry Morris of Nunnelly, Tennessee, Robin Wolaver of Columbia, Tennessee, and David Donica of Hatﬁeld, Arkansas, seventeen grandchildren, and thirty great-grandchildren. “Jane” to those who knew her, Mrs. Donica was born on August 28, 1933, to Othar Moses and Annie Fortner, two ﬁeld hands who lived in McKinney, TX, north of Dallas. She was the second of three children, and loved to play marbles and ride bikes with her older brother George and her younger brother Rooney. Jane was raised in the cotton ﬁelds of Depression-era Texas where her classical voice and arresting beauty made her a belle of the community. Swept oﬀ her feet by Riley Donica, a young preacher from Oklahoma, she married and moved to the hamlet of Zafra in the Kiamichi Mountains in December 1957, to join Riley in his work as a missionary. Jane soon became a pillar of the mountain territory, feeding hungry visitors—whether friends or strangers—nursing the sick, visiting the families of prisoners and those recently deceased, and caring for neglected children, many of whom came to regard her as a second mother. She taught Sunday School and spread the light of Christ wherever she went, both in her words and in her deeds. Imbued with the hardscrabble tenacity and awe-inspiring culinary skill of her mother, Annie, along with the elegance and discernment of her mentor, Mrs. Leona Harris—the musically gifted wife of a wealthy plantation owner—Jane poured out her extraordinary talents and generous heart on the hard soil of Southeastern Oklahoma. Though she had taken few piano lessons due to her childhood poverty, her passion for music and her remarkable voice added sparkle to revival meetings across the country and inspired a similar artistry in her children. Jane supported her husband’s mission with untiring devotion, joining in his work with an elegance and skill that made each enterprise a success. Whether it was typing a letter, baking a cake for a wedding, or opening her home to those in need, Jane made it her work to change lives for the better. She is admired and beloved, and her presence graced the world as it now graces heaven. In lieu of ﬂowers, the family requests donations be sent to JOHN 3:17 MINISTRY, Att. SUZANNE RUDD, 431 HWY 145 SOUTH, NEWPORT, AR 72112. Donation can be made online by going to www.john317ministry.org . Funeral services will be directed by Beasley-Wood Funeral Home, at the First Christian Church of Mena, Arkansas, on Wednesday, October 16th, 2019, at 2:00 P.M. Viewing will begin at 1:30. Interment will be Pinecrest Memorial Park Cemetery in Mena, Arkansas. Visitation will be held Tuesday, October 15th, 2019, from 5:30 until 7:30, at the Beasley-Wood Funeral Home.Ph: 479-394-1310 Fx:479-394-2984

The family of Ethel Jane Donica created this Life Tributes page to make it easy to share your memories.

Send flowers to the Donica family.