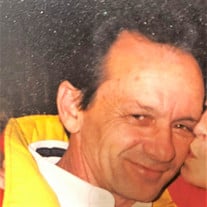 Mr. Edward Wayne Johnson, 70 of Tulsa, Oklahoma, formerly of Hatfield, Arkansas, passed away Sunday, April 4, 2021 in Tulsa. He was born January 12, 1951 in New Orleans, Louisiana, and was adopted by the late Herbert and Melva (Freeze) Johnson and raised in New Iberia, Louisiana until they relocated to the Hatfield area in 1963. He loved all things fast, including racing cars, horses and boats, earning him the moniker, “Fast Eddie”. He jockeyed horses for a time and won at the Blue Ribbon Downs Track in Sallisaw, Oklahoma, and won his share of car races, although he was black flagged a lot due to his unusual driving skills! He was a talented mechanic and never met a rig he couldn’t fix, and enlisted his daughter Sarah to help apprentice with his work, as well as ride shotgun on his Hot Shot adventures, although he was unable to persuade his oldest, Jolie as she was afraid it would mess up her nails!! He was an avid hunter and also loved to take the family to the lake for waterskiing adventures and worked hard his entire life. He will be deeply missed by his family and friends. He is survived by his wife, Sano Johnson of Tulsa, Oklahoma, sons, Jason Goodner of Mena, Arkansas and Davey Blitz Johnson of Tulsa, Oklahoma, daughters, Lisa Rose and Jolie Johnson Fender of Mena, Arkansas, his sister, Judy Larru and husband Richard of Mena, Arkansas, his sister-in-law, Janet Johnson of Mena, Arkansas, his grandchildren, great-grandchildren and a host of other relatives and friends. He was preceded in death by his daughter, Sarah Jonelle Johnson Miller, his parents, Herbert and Melva Johnson, his brother, Neal Johnson. A memorial service will be held to honor Eddie’s life on Saturday, May 1, 2021 at 2:00 p.m. at the Beasley Wood Funeral Home Chapel under the direction of the Beasley Wood Funeral Home.

Mr. Edward Wayne Johnson, 70 of Tulsa, Oklahoma, formerly of Hatfield, Arkansas, passed away Sunday, April 4, 2021 in Tulsa. He was born January 12, 1951 in New Orleans, Louisiana, and was adopted by the late Herbert and Melva (Freeze) Johnson... View Obituary & Service Information

The family of Mr. Edward Wayne Johnson created this Life Tributes page to make it easy to share your memories.

Send flowers to the Johnson family.