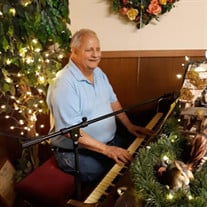 David Erwin Danforth, age 72, passed away August 17, 2021, in Hot Springs, Arkansas. He was born November 24, 1948, in Freemont, Ohio, to Erwin Chiles and Betty Jane (Bryant) Danforth. Mr. Danforth served his country in the army during his lifetime, and afterwards worked as a carpenter. He enjoyed many outdoor activities like fishing, camping, exploring, and traveling to both the everglades and Arkansas. He also enjoyed more artistic activities as well, he was known to be a very talented chef as well as a talented musician, he also enjoyed photography and even narrated his own videos. Mr. Danforth is preceded in death by his father, Erwin Chiles Danforth and his sister, Betty Jane Miller. He is survived by his mother, Betty Jane Danforth; sons, John and David Jr. Danforth; Grandchildren, Kimberly Danforth, Emily Danforth, Hayden Danforth, Angely Danforth, Keely Danforth, Lexi Danforth, and Luca Danforth; brother, Joe and wife Margie Danforth; sisters, Sandra and husband Glen, Rebecca Strong, and Beverly Bridwell; as well as several nieces, nephews, and a host of other friends and family. The family would also like to add an Honorable Mention to his niece (Beverly Ann Bridwell) a Registered nurse who went to check on him the day of his sister’s (Betty Jane Miller’s) funeral. She had to have him rushed to the hospital and then coordinate his funeral arrangements. From all the family, We Love and thank her for all she has done for Aunt Betty Jane and Uncle David! Funeral Services will be held Saturday August 21, 2021, at Board Camp Assembly of God Church at 2:00 p.m., with Brother Tim Rose officiating. Arrangements are under the direction of Beasley-Wood Funeral Home.

David Erwin Danforth, age 72, passed away August 17, 2021, in Hot Springs, Arkansas. He was born November 24, 1948, in Freemont, Ohio, to Erwin Chiles and Betty Jane (Bryant) Danforth. Mr. Danforth served his country in the army during his... View Obituary & Service Information

The family of Mr. David Erwin Danforth created this Life Tributes page to make it easy to share your memories.

Send flowers to the Danforth family.