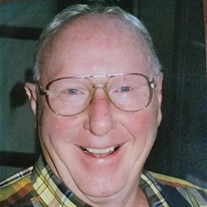 Our beloved uncle and friend, Charles "Dood" Baker, passed away with family by his side on January 1, 2022 at the age of 85 in Texarkana, TX. Charles was born to Jimmie and Lula Baker on January 26, 1936. Charles was one of a kind and lived life on his terms. In high school, he was known as an awesome athlete. Many athletes from his time said Charles was one of the best basketball players in the area. He would play center and tip the ball to a teammate and go to half court to make the shot most of the time. He also shot through the rafters at the old Wickes gym on a regular basis. A few days after graduation at Wickes High School, Class of 1956, Charles took a sack of clothes and boarded a bus with a ticket to ride as long as you want with only a few dollars to his name. He got off in Northern California somewhere near Eureka. He worked at a sawmill and didn’t buy a car for the first five years out there. For ten years, he owned and co-operated a local bar. His heart was too big for the bar life though. He went to work for Louisiana Pacific in Eureka, California until he retired. Charles loved people, his family, basketball, and hunting. He spent his time off (vacation) driving home to attend school reunions, hunt, and spend time with his family. In 2002, he moved back home to be close to his family, especially his sisters, Marie and Gladys. He always said he went to two churches (Wickes Methodist Church and Wickes Nazarene) every Sunday to make up for living a rough life in his early days. He was a friend to everyone he met! Charles is preceded in death by his parents, Jimmie and Lula Baker; brothers, Orville Baker, Ralph Baker, Ed (Thelma) Baker, and James (Teelie) Baker; sisters, Marie (Keith) Duckett and Gladys (Jim Ed) Duckett; nephews, Johnnie Duane Duckett, James Truman Baker, Roy Johnson; niece, Mitzi Duckett. He is survived by Orville Louis "Dood" (Kathy) Baker Jr., Kathy (Jon) Johnson, Gary Hargis, Todd (Angie) Baker, Ronnie Duckett, Kay Johnson, Frankie (Dawn) Duckett, Cindy (Sam) Ahrens; and special friends, John Willard Hill, Fred Allen, Faith Lynch, and his Cossatot Senior Center family. Pallbearers will be Aaron Ahrens, Sam Ahrens, Frankie Duckett, Kyle Duckett, Ronnie Duckett, Johnny Johnson, Brad Lyle, and Jeffrey Richardson. Honorary pallbearers are Fred Allen, Orville "Dood" Baker Jr., Zack Frachiseur, John Willard Hill, Don Hoyle, and Paul Melton. Services will be held Tuesday, January 4, 2022, at 2:00 p.m. at Baker Cemetery in Wickes, Arkansas. Brother Stephen Copley and Pastor B.J. Jenkins will officiate, under the direction of Beasley-Wood Funeral Home. Charles was a superfan of the Cossatot Senior Center in Wickes, Arkansas and served faithfully on the Board of Trustees. In honor of his love for the senior center, the family requests that in lieu of flowers, donations can be made to the Cossatot Senior Center in memory of our beloved family member and friend, Charles "Dood" Baker.

Our beloved uncle and friend, Charles "Dood" Baker, passed away with family by his side on January 1, 2022 at the age of 85 in Texarkana, TX. Charles was born to Jimmie and Lula Baker on January 26, 1936. Charles was one of a kind and lived... View Obituary & Service Information

The family of Mr. Charles "Dood" Baker created this Life Tributes page to make it easy to share your memories.

Our beloved uncle and friend, Charles &quot;Dood&quot; Baker, passed away...

Send flowers to the Baker family.