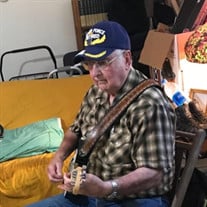 Boby Dale “Bob” Varner, age 83, of Hatfield, Arkansas passed away Saturday, March 12, 2022, in Mena. Bob was the fifth son and the youngest child of seven children born to Earl and Pearlie Louollie (nee Brewer) Varner. He was born on April 2, 1938, in his parents’ house near Hatfield, Polk, Arkansas on the hillside that is now affectionately called “Chigger Hill” by Varner descendants. According to his older brother Foy, his parents intended for his name to be Robert Dale Varner, but his name was recorded as Boby Dale Varner. During his childhood, he helped the family with farm chores and attended school in Hatfield. Bob was a Vietnam veteran. He joined the United States Air Force on May 15, 1955, and attended basic training at Lackland Air Force Base, San Antonio, Texas. He was then assigned to Clovis AFB, New Mexico. In June 1957 he was assigned to Indian Spring AFB, Nevada and served there during the testing of atomic bombs. He married Betty Jean Fairless on November 17, 1958, in Las Vegas, Nevada. Betty was born on July 26, 1939, in McCurtain, Oklahoma. (Betty wrote the date as June 27, 1939, but Bob said that formal record and her funeral brochure list the date as July 26, 1939.) Their sons Rodney and Randy were born ther in 1960 and 1962. In May 1959, he was assigned to Custard Air Force Station, Battle Creek, Michigan. Bob was a world-renowned musician. He played with many stars and was known to be the hottest lead guitarist in the country during the 1960’s and 1970’s. Bob ran Bob’s Auto Service in Hatfield for 25 years. He was an avid motorcycle rider and classic car collector. He enjoyed camping and traveling in his motorhome. Bob loved the Lord and was a faithful member of the Hatfield Church of Christ. He is survived by his sons, Rodney Varner, Randy Varner and wife Rhonda; grandchildren, Ariel Varner, Shevy Thompson, Kaely Skelton and Sarah Horton:15 great-grandchildren and a host of nieces, nephews and other family and friends. He is preceded in death by his parents Earl and Pearlie Varner; his wife, Betty Varner; grandchild, Dustin Mahaffey. Funeral service will be Friday, March 18, 2022, at 2:00 p.m. at the Hatfield Church of Christ under the direction of Sam Varner, Jr. Interment will follow in the Six-Mile Cemetery under the direction of the Beasley-Wood Funeral Home. Visitation will be Thursday, March 17, 2022 from 6:00 to 8:00 p.m. at the Beasley-Wood Funeral Home.

The family of Mr. Boby Dale Varner created this Life Tributes page to make it easy to share your memories.

Send flowers to the Varner family.