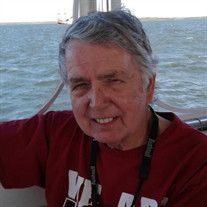 Audie Gene Wigger, age 72, of Mena, Arkansas passed away Saturday, March 14th, 2020 in Mena. He was born September 17, 1947, in Mena to the late Jodie Wigger and the late Hazel Carter Wigger. He married Susan Lee Johnson on September 29, 1967. Audie was elected as the Polk County Assessor in 1976 and served until 1986. In conjunction with his term, he served as President of the Arkansas Assessor Association. Following his term, he worked for the State of Arkansas in the Assessment Coordination Department for more than 25 years. After retirement, he worked several years as an auditor for the Total Assessment Solutions Corporation. In his free time, Audie enjoyed playing golf, woodworking and antiquing. He loved working in his shop where he spent years working on various projects. Junking with his wife, Sue, was his favorite past time. He was also a master on the grill and above all, he loved spending time with his family. He was a devoted and loving husband, father, grandfather, brother, uncle, and friend. Audie's quick wit and calming personality were evident to all who knew him. He never met a stranger. You could always find him at his shop, with Audie you were always welcome. He was preceded in death by his parents Jodie and Hazel, stepmother Rose, his in-laws Walter and Mary Margaret Johnson, a brother Dennis, and niece Sally. He is survived by his wife of 52 years, Susan of Mena, daughters Jennifer Meldrum and husband Steven of Fayetteville, and Theresa McLellan and husband Michael of Fayetteville. Grandchildren Blake Meldrum and fiancée Shawna Bateson, Drew Meldrum and Annie Meldrum of Fayetteville. Brother James Wigger and wife Suzi, children Ian and Kiezen of New York. Brother-in- law Pete Johnson, wife Linda and nieces Emily Turner, husband Eric and children Emma and Jacob all of Mena, and niece Lori Thomas and children Cassady and Marlee of Dallas. Brother-in-law Tommy Johnson and wife Karen, and nephew Robert of Mena. And niece Casey Wigger. Mr. Wigger will be sent for cremation under the direction of the Beasley Wood Funeral Home. A memorial service will be announced at a later time.

The family of Mr. Audie Gene Wigger created this Life Tributes page to make it easy to share your memories.

Send flowers to the Wigger family.