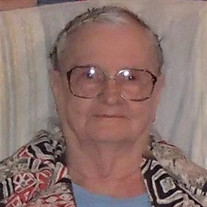 Annie Muriel Whisenhunt Hendrix, 93, of Shady, met her Lord and Savior on January 17, 2020 after suffering and surviving two heart attacks. She was born in Shady, Arkansas to Joseph D. and Effie C. Lawrence Whisenhunt, the last surviving child of five siblings. She was preceded in death by her husband Paul, her parents, an infant brother, sisters and brothers-in-law, Gertrude and Hubert Cox and Josephine and W.C. Bailey and brother Edward R. Whisenhunt of Louisiana, who was to be buried on the day of her passing. She was married to Paul Hendrix for 43 years and bore four children who survive her, sons D. Gene Hendrix and wife Vicki, E. Dean Hendrix and wife Ilene, J. Danny Hendrix and wife Elizabeth(Beth) and daughter Annita Hendrix all of Polk County, Arkansas. Miss Muriel was a daughter, mother, grandmother, sister, friend and devout Christian. She leaves 12 grandchildren, 26 great-grandchildren, 7 great-great-grandchildren and numerous nieces, nephews and friends to celebrate her life. She will lie in state at Beasley-Wood Funeral Home, Mena, Arkansas until January 20, 2020, at 2p.m. when she will be transported to New Hope Baptist Church at Shady for final services with Brother Danny Minton officiating. Miss Muriel will be laid to rest in Shady Cemetery beside her husband and amidst all the family members who welcomed her Home. Pallbearers will be Bryon Hendrix, Jason Hendrix, Travis Hendrix, John Harrison, Elgie Evans and Travis Philpot. Honorary pallbearers are the rest of her family who she loved wholeheartedly and her church family of New Hope Baptist Church. Online obituary at www.beasleywoodfuneralhome.com

The family of Mrs. Annie Muriel Hendrix created this Life Tributes page to make it easy to share your memories.

Annie Muriel Whisenhunt Hendrix, 93, of Shady, met her Lord and...

Send flowers to the Hendrix family.